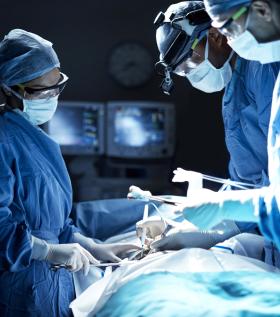 Upon completion of the seminar, the perioperative nurse will be able to identify ways of prevention of hypothermia, identify signs and symptoms that a patient may exhibit related to pressure injuries, identify changes in normal EKG rhythms, malignant hyperthermia, sepsis recognition, Hemorrhage, local anesthetic systemic toxicity and surgical emergencies in the Perioperative patient.

For perioperative and procedural RN staff only. Methodist employees must be approved by management

At the completion of this activity the perioperative Registered Nurse should report being better prepared to identify and respond to potential detrimental changes in a patient’s condition. They should also identify one new learning that they intend to apply to personal practice as reflected in the post-survey.

is a high-performing, strategically thinking professional with more than 13 years’ experience in the management of  Perioperative and Ambulatory Services.  She has earned a Bachelor of Science in nursing from the University of South Florida, Tampa, and an M.B.A. in health care management from Our Lady of the Lake University, San Antonio. She also has been a Perioperative nurse for 33 years and a member of AORN for 31 years! Currently she is the Nursing Director for  the Main 3 and Dunn 6 PeriOperative Services, at Houston Methodist Hospital.

Karen has performed  in many leadership roles that have  helped determine patient safety, and the quality of care being provided by nurses in the perioperative setting. She is currently a member of the AORN National Board of Directors and also serves on the finance and audit committee. In the past she has served on the board of competency and credentialing institute (CCI), she served in roles such as: Board member, Vice President and President (2012-2014).

Rachel Miller Abanilla, MSN, RN, CNOR, NPD-BC, is the Professional Practice Leader of Perioperative Services at Houston Methodist West Hospital, a multi-specialty OR with 24 rooms,   including 2 Hybrid rooms. She earned her Bachelor of Science in Nursing abroad in March 1994 and her Master's in Nursing Education at Walden University in 2021. She is a board-certified nurse professional development practitioner.  She has worked in the OR for over 20 years and has earned most of her knowledge and skills from working at level 1 trauma facilities in her early years in the OR.  She has been a certified perioperative nurse since 2008. She is active in the local AORN chapter and has held positions of president, vice president, and board member of AORN West Houston Chapter 4436.

Jenell Moultrie  MSN, RN, CNOR graduated from Prairie View A&M University with her bachelor’s degree and received her MSN in Leadership and Management from Western Governors University.  During her 14-year tenure at Houston Methodist Hospital she has worked in various operating rooms but specializes in plastics and reconstructive surgery.  Currently, Jenell works as the unit educator for OPC 18 OR and perioperative resource nurse for the plastics/reconstructive surgery department.  She is also currently serving as the chairperson for the nominating and scholarship committees for the AORN Greater Houston Chapter.

LaRhea A. M. Meza, MSN, RN, CPAN, CNOR, CNAMB is a Professional Development Leader with over 17 years of nursing and allied health experience. During her six years with Houston Methodist she has served as a robotic coordinator, shared governance chair, and lead preceptor. She currently serves as the perioperative nurse educator at Houston Methodist Baytown. Her experience as a med-surg, PACU, pre-admission testing, day surgery, in-patient pediatric, ER, and OR nurse stateside and abroad has prepared her to provide evidence-based training and education for nurses in all five units within Surgical Services and the ambulatory surgery center. Her leadership and management philosophies are to lead fairly and fearlessly.

Donald Yap, MBA, BS, BA, BSN, RN-BC  is a Professional Practice Leader at Houston Methodist Hospital. He graduated from the University of Missouri, Columbia in 2002 with a double major: Bachelor of Science- Biological Sciences and Bachelor of Arts – Communication.  He went on to complete his MBA in 2004 at the University of Missouri, Columbia as well.

After working for a couple years, he decided to change careers and go into nursing. In 2007 he graduated with his BSN from Maryville University, Saint Louis and in 2015 became board certified in Nurse Professional Development. In 2020, he was appointed as an Instructor of Nursing in the Houston Methodist Academic Institute.

As a bedside nurse, he began his career in a CVICU/Surgical ICU setting and became a nurse educator in 2011.  Since then he has held positions as a unit specific educator and service line educator.  With his current position as a Professional Practice Leader at Houston Methodist Hospital, he teaches both basic and 12 Lead EKG courses and is author of “Basic ECG Quick Cards”.  Donald also coordinates education and annual nursing competency for Ventricular Assist Devices and actively assists with Simulation education for nursing staff.

He has spoken at various conferences here at HMH as well as for the Houston Area Nurse Practitioners and he has also been the Commencement speaker for Chamberlain University College of Nursing.  In his spare time, he enjoys  running and general fitness activities, filming gear reviews for his YouTube channel, Tae Kwon Do, and axe throwing.

Houston Methodist is accredited as a provider of nursing continuing professional development by the American Nurses Credentialing Center's Commission on Accreditation.

To be awarded 7.25 continuing professional development hours, the participant must attend the program in its entirety and complete the evaluation tool.

Cost:
$20.00
Please login or register to take this course.

If you are an employee of Houston Methodist and this is your first time accessing this site, you may proceed to register for your activity by following these steps:

If this is your first time access this site, please create your account by following these steps:

If you have previously created a profile, you may proceed with registering for the activity by selecting “Log In.”  Select “Visitor Log In,” and login with the information you previously used.